The Maine Coon is one of the largest domesticated breeds of cat.

It has a distinctive physical appearance and valuable hunting skills. It is one of the oldest natural breeds in North America, specifically "native" to the state of Maine (though the feline was simply introduced there), [3] where it is the official state cat. 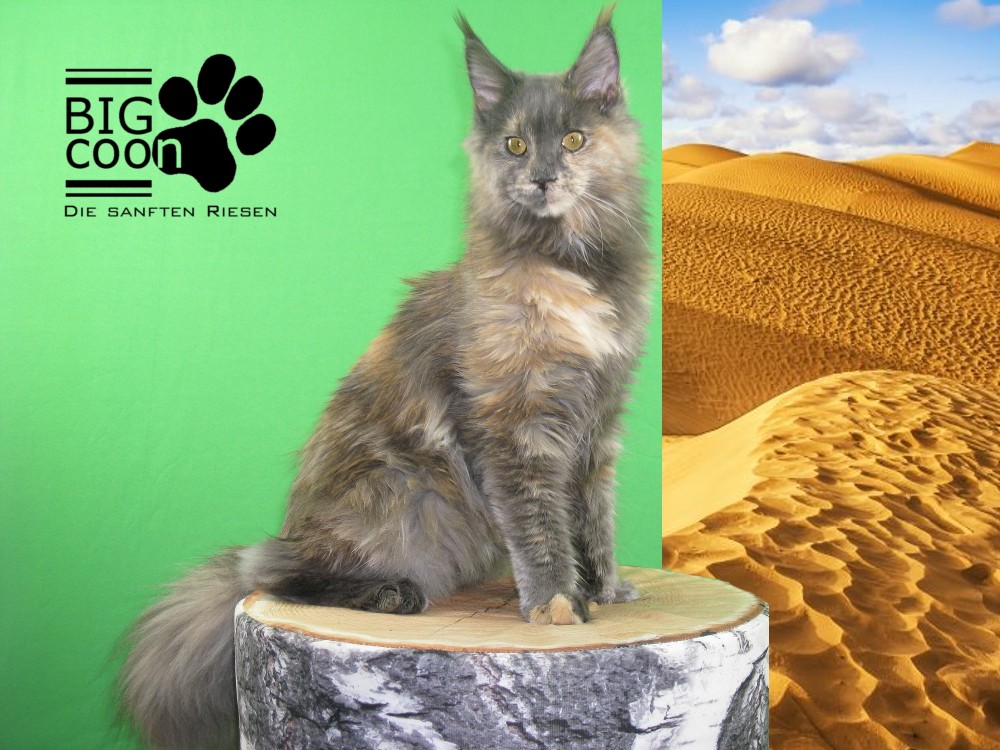 No records of the Maine Coon's exact origins and date of introduction to the United States exist, so several competing hypotheses have been suggested. The breed was popular in cat shows in the late 19th century, but its existence became threatened when long-haired breeds from overseas were introduced in the early 20th century. The Maine Coon has since made a comeback and is now one of the more popular cat breeds in the world.

The Maine Coon is a large and sociable cat, hence its nickname, "the gentle giant." It is characterized by a prominent ruff along its chest, robust bone structure, rectangular body shape, a silky flowing coat, and a long, bushy tail. The breed's colors vary widely, with only lilac and chocolate disallowed for pedigree. Reputed for its intelligence and playful, gentle personality, the Maine Coon is often cited as having "dog-like" characteristics. [4][5] Professionals notice certain health problems in the breed including feline hypertrophic cardiomyopathy and hip dysplasia, but reputable breeders use modern screening methods to minimize the frequency of these problems.

The ancestral origins of the Maine Coon are unknown [6] — there are only speculation and folk tales. One such folk tale involves Marie Antoinette, the Queen of France, who was executed in 1793. The story goes that before her death, Antoinette attempted to escape France with the help of Captain Samuel Clough. She loaded Clough's ship with her most prized possessions, including six of her favorite Turkish Angora cats. Although she did not make it to the United States, her pets safely reached the shores of Wiscasset, Maine, where they bred with other short-haired breeds and developed into the modern breed of the Maine Coon. [7]

Another folk tale involves Captain Charles Coon, an English seafarer who kept long-haired cats aboard his ships. Whenever Coon's ship would anchor in New Englandports, the felines would exit the ship and mate with the local feral cat population. When long-haired kittens began appearing in the litters of the local cat population, they were referred to as one of "Coon's cats". [8]

A myth which is trait-based, though genetically impossible, [9] is the idea that the modern Maine Coon descended from ancestors of semi-feral domestic cats and raccoons. This myth is likely based on the common color of the breed (brown tabby) and its bushy tail. [10] Another idea is that the Maine Coon originated from the matings of domestic cats and wild bobcats, which could explain the tufts of hair that are so commonly seen on the tips of the ears. [8]

The generally accepted hypothesis among breeders is that the Maine Coon is descended from the pairings of local short-haired domestic cats and long-haired breeds brought overseas by English seafarers (possibly by Captain Charles Coon) or 11th-century Norsemen. [10][11] The connection to the Norsemen is seen in the strong resemblance of the Maine Coon to the Norwegian Forest Cat, another breed that is said to be a descendant of cats that traveled with the Norsemen. [12][13]

The Maine Coon is the largest breed of domestic cat. On average, males weigh from 13 to 18 lb (5.9 to 8.2 kg) with females weighing from 8 to 12 lb (3.6 to 5.4 kg). [19] The height of adults can vary between 10 and 16 in (25 and 41 cm) and they can reach a length of up to 48 in (120 cm), including the tail, which can reach a length of 14 in (36 cm) [20] and is long, tapering, and heavily furred, almost resembling a raccoon's tail. The body is solid and muscular, which is necessary for supporting their own weight, and the chest is broad. Maine Coons possess a rectangular body shape and are slow to physically mature; their full potential size is normally not reached until they are three to five years old, while other cats take about one year. [21]

In 2010, the Guinness World Records accepted a male purebred Maine Coon named "Stewie" as the "Longest Cat" measuring 48.5 in (123 cm) from the tip of his nose to the tip of his tail. Stewie died 4 February 2013, from cancer at his home in Reno, Nevada, at age 8. [22][23] Large Maine Coons can overlap in length with Eurasian lynxes, although with a much lighter build and lower height. [24]

The Maine Coon is a long- or medium-haired, cat. The coat is soft and silky, although texture may vary with coat color. The length is shorter on the head and shoulders, and longer on the stomach and flanks with some cats having a lion-like ruff around their neck. Minimal grooming is required for the breed, compared to other long-haired breeds, as their coat is mostly self-maintaining owing to a light-density undercoat. The coat is subject to seasonal variation, [25] with the fur being thicker in the winter and thinner during the summer.

Maine Coons can have any colors that other cats have. Colors indicating crossbreeding, such as chocolate, lavender, the Siamese pointed patterns or the "ticked" patterns, are not accepted by some breed standards (the 'ticked' pattern, for example, is accepted by TICA). [8] The most common pattern seen in the breed is brown tabby. [26] All eye colors are accepted under breed standards, with the exception of the occurrence of blue-colored or odd-eyes (i.e. two eyes of different colors) in cats possessing coat colors other than white. [25]

Maine Coons have several physical adaptations for survival in harsh winter climates. Their dense water-resistant fur is longer and shaggier on their underside and rear for extra protection when they are walking or sitting on top of wet surfaces of snow or ice. [27] Their long and bushy raccoon-like tail is resistant to sinking in snow, and can be curled around their face and shoulders for warmth and protection from wind and blowing snow and it can even be curled around their backside like an insulated seat cushion when sitting down on a snow or ice surface. [28] Large paws, and especially the extra-large paws of polydactyl Maine Coons, [29]facilitate walking on snow and are often compared to snowshoes. [27] Long tufts of fur growing between their toes help keep the toes warm and further aid walking on snow by giving the paws additional structure without significant extra weight. [28] Heavily furred ears with extra long tufts of fur growing from inside help keep their ears warm. [27]

Many of the original Maine Coon cats that inhabited the New England area possessed a trait known as polydactylism (having one or more extra toes on the feet). [27] While some sources claim that trait is thought to have occurred in approximately 40% of the Maine Coon population in Maine at one time, little evidence has been given to substantiate this claim. [30] Polydactylism is rarely, if ever, seen in Maine Coons in the show ring since it is unacceptable by competition standards. [31] The gene for polydactylism is a simple autosomal dominant gene, [32] which has shown to pose no threat to the cat's health. [33] The trait was almost eradicated from the breed due to the fact that it was an automatic disqualifier in show rings. [34] Private organizations and breeders were created in order to keep polydactylism in Maine Coons from disappearing.

Maine Coons are known as the "gentle giants" [5] and possess above-average intelligence, making them relatively easy to train. [4] They are known for being loyal to their family and cautious—but not mean—around strangers, but are independent and not clingy. The Maine Coon is generally not known for being a "lap cat" but their gentle disposition makes the breed relaxed around dogs, other cats, and children. They are playful throughout their lives, with males tending to be more clownish and females generally possessing more dignity, yet both are equally affectionate. [27] Many Maine Coons have a fascination with water and some theorize that this personality trait comes from their ancestors, who were aboard ships for much of their lives. [6] Maine Coons are also well known for being very vocal cats. They are known for their frequent yowling or howling, trilling, chirping, and making other loud vocalizations. [35]